Awe-inspiring scenery, vibrant capital and a welcoming atmosphere all make Iceland a popular tourist destination. Iceland is a relatively vast land encompassing majestic mountains, spectacular glaciers, active volcanoes, spacious highlands and ever-changing landscape. An overview of some of the best places to visit in Iceland: 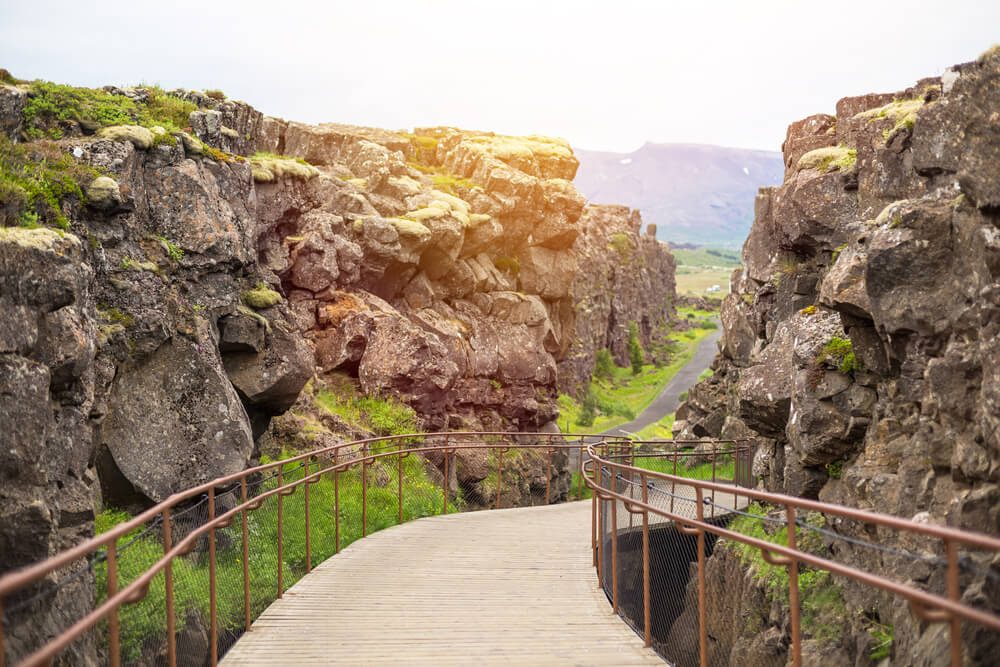 Located at the Hvita River on the Southwest of Iceland, Strokkur Geysir and The Great Geysir is the second location along the Golden Circle route. On arrival the overpowering smell of sulphur is the first thing that hits you, then, out of nowhere vast jets of water spray into the sky above, exposing the sheer power of nature and the complete magnificence of this geothermal area.
The majestic Gullfoss waterfall is the final site on the Golden Circle Tour. The mighty Hvita River abruptly disappears into a ravine at a remarkable waterfall known as Gullfoss or ‘Golden Falls’ in English; known for its breath-taking power and rainbows on a sunny day, Gullfoss is a mesmerising natural wonder. 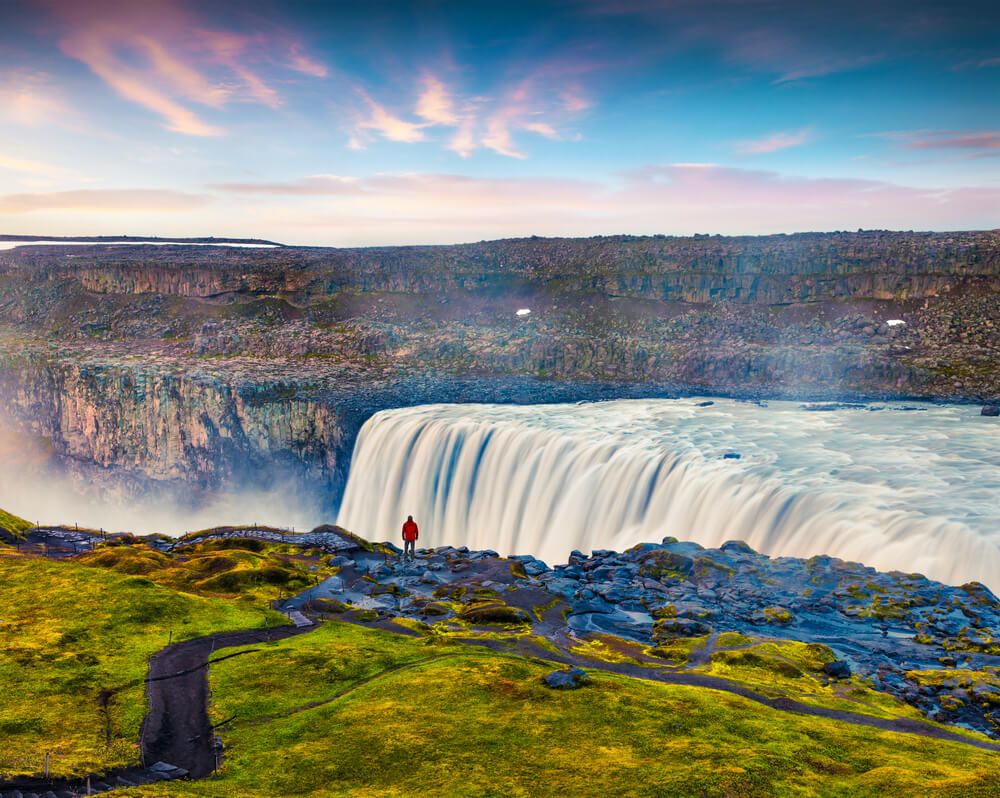 Dettifoss will blow you away with its sheer size and power. Dettifoss is Europe’s greatest waterfall – at least regarding volume, which averages 500 cubic meters of water per second during normal river conditions. Its amount often increases, though, especially when the weather or volcanic activity, prompts glacial melting on (or under) the Vatnajokull glacier icecap. The river water is almost always dark with sediment, in contrast with the white rapids and spray. A waterfall so wild and fierce is befitting of an area that just screams natural and raw environment, as it flows on the glacial river Jökulsá á Fjöllum. 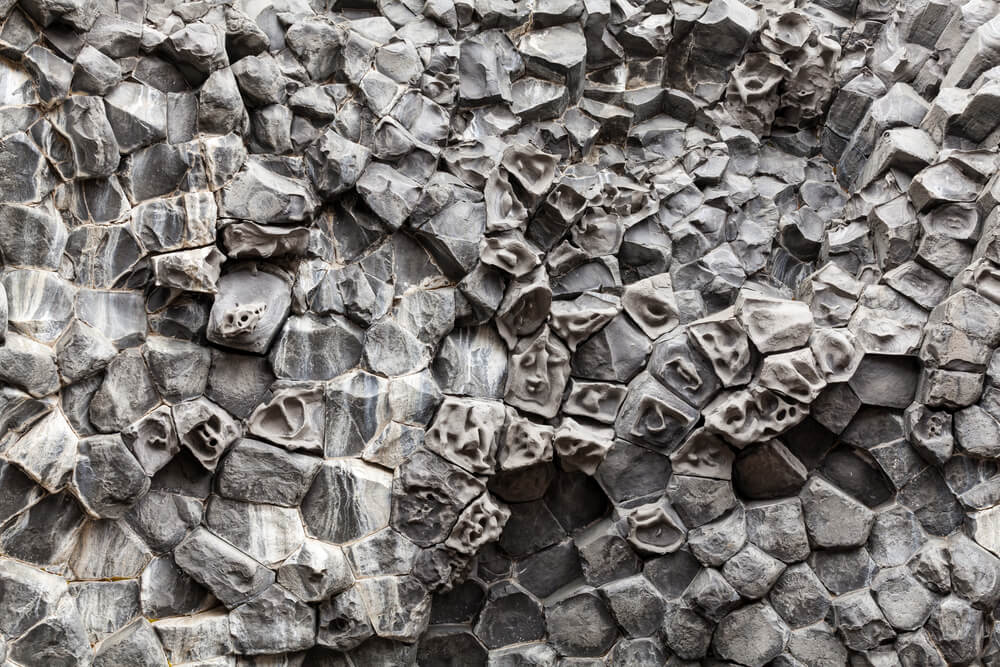 Ásbyrgi canyon lies in the north of Iceland, about 50-minute drive to the east from Húsavík on the Diamond Circle road. The horseshoe-shaped depression is part of the Vatnajökull National Park and measures approximately 3.5 km in length and over 1 km wide.[1] For more than half of its range, the canyon is divided through the middle by a distinctive rock formation 25 meters high called Eyjan (“the Island”), from which a vast landscape is seen.

The canyon’s steep sides are formed by cliffs up to 100 metres in height. Down in the canyon, visitors walk through a woodland of birch and willow. Between 1947 and 1977, many foreign tree species were introduced, including spruce, larch and pine. The small lake Botnstjörn is home to a variety of waterfowl species.

The capital of Iceland has become a cutting-edge city boasting avant-garde design, art and architecture as well as chic and inventive new restaurants. Its nice centre is perfect for exploring by foot, and the city also boasts some of the best in contemporary design, particularly when it comes to interiors. Reykjavik is very child-friendly and is an excellent choice for families. The Icelanders have a reputation for being friendly, tolerant and allegedly among the happiest nationality on earth – making their capital an ideal choice for a hip, laid-back and relatively undiscovered weekend break destination.

In the northeastern part of Iceland lies a town named Akureyri, considered by many to be the real gem of Icelandic tourism. Akureyri, which lies in Eyjafjordur fjord is surrounded by snow-capped mountains during winter time and blessed with sunshine and considerably warm climate during summertime. Well this is Iceland so let‘s say often, but not always, blessed with a mild climate and sunny days. The town itself and nearby area simply begs to be explored but is often ignored by travellers that don‘t have time to explore further than the southwest corner of Iceland.
Akureyri is Iceland’s second city (though its population is smaller than that of many English market towns). It is just this side of the Arctic Circle, five hours’ drive from Reykjavik on a good day. Like many Icelandic towns, Akureyri is surrounded by a North American-style suburban sprawl, but its centre feels European (though to most Icelanders “Europe” is somewhere culturally distinct). Wooden houses in Lego colours line the harbourfront; the main street is lined with 19th-century shop-fronts with verandas and lacy white-painted carving.

Traveling in Akureyri itself is interesting enough to spend a day or two walking in different parts of town. In the centre, you’ll find exciting galleries, shops and restaurants. The church of Akureyri sits on a hill above the centre and not far from the church is The Akureyri Botanical Garden, known for its beautiful walking paths and lush flora. It was founded in 1912, and it contains nearly every plant found in Iceland. Walking south from the botanical garden you will enter the oldest part of Akureyri, home of Iceland‘s most famous ice cream store and the pleasant Nonnahus museum. Akureyri also has a striking new concert hall, the Hof, more approachable than Reykjavik’s astonishing Harpa. 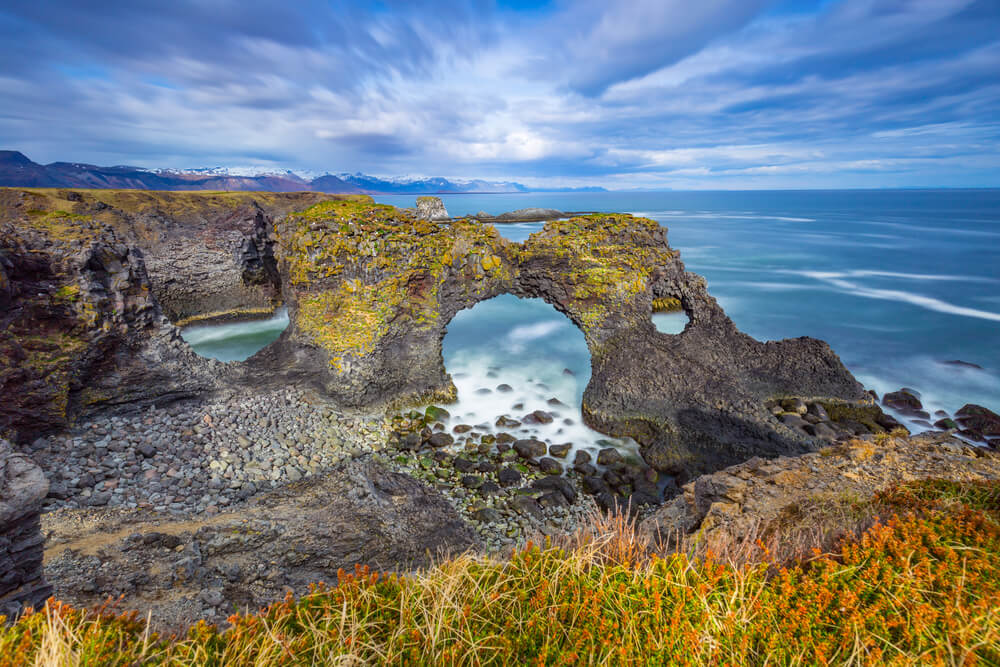 The Snæfellsnes Peninsula is a photographer’s dream with dramatic sea cliffs, a volcano that served as the setting for Jules Verne’s Journey to the Center of the Earth and sweeping golden beaches.
On the tip of the peninsula is Snæfellsjökull National Park, the country’s youngest national park and only park in Iceland that is situated on the coast. It features sites like the mystical glacier Snæfellsjökull, an inactive volcano and Djúpalónssandur or the black Lava Pearl Beach. There you will find peculiar rock formations, one which has a large hole in the middle and by looking through it you will see Snæfellsjökull.

Most of Iceland’s beaches are black sand and they’re beautiful. But there’s something extraordinary about golden stretches of sand and the chilly Atlantic Ocean crashing on to them. One of the few golden sand beaches in Iceland can be found on the Snæfellsnes Peninsula. You’ll want to plan some time to put your toes in the golden sand and collect some of the coloured pebbles that wash up on the shore here.

At Snaefellsnes, you can really journey to the centre of the earth, just like the movie. Vatnshellir is an 8000-year-old lava tube that stretches for 200 meters in length down 35 meters beneath the surface.
One of the most iconic landmarks of the Snæfellsnes Peninsula, Mount Kirkjufell is a freestanding mountain standing 463 meters tall. It’s also the most photographed mountain in Iceland.

Last but not least, Arnarstapi and Hellnar, should not be overlooked while covering the Snaefellsnes peninsula. 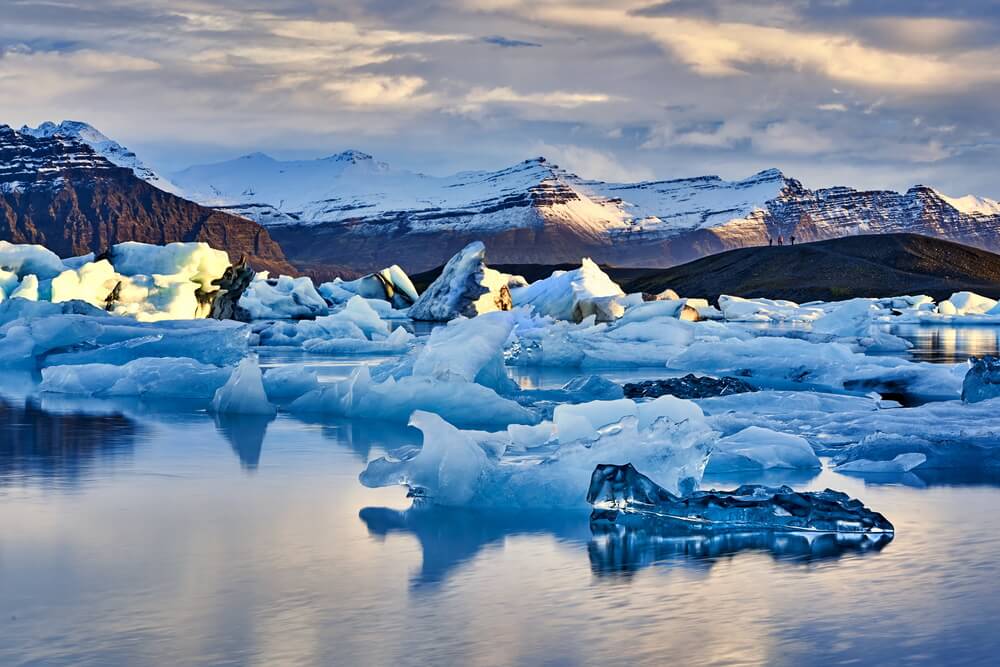 The Jökulsárlón Lagoon, edging Vatnajökull National Park, is a spectacular glacial lagoon located in the southeast of Iceland about four hours east of Reykjavik. One of Iceland’s largest and most well-known glacial lakes, the lagoon is a natural work of art offering unparalleled beauty, earning its reputation as one of the Iceland’s most treasured natural wonders.

When you visit the lagoon, you will discover all shapes and sizes of glacial blocks of ice, (broken off from the massive Vatnajökull glacier nearby) floating around in blue-green water; a striking colour that comes from its mixture of saltwater and freshwater. Each iceberg is its own unique work of art, stunningly sculpted and exotically coloured especially at dawn, sunrise or sunset when the light illuminates the icebergs. Depending on tidal currents and the wind, the icebergs eventually float out to sea or waves push them back towards the beach, where they lie scattered along the black sand shores like glistening gems. With an ever-changing landscape and continuously evolving scenery, the Jökulsárlón Lagoon is sure to offer an incredible experience every time you visit. 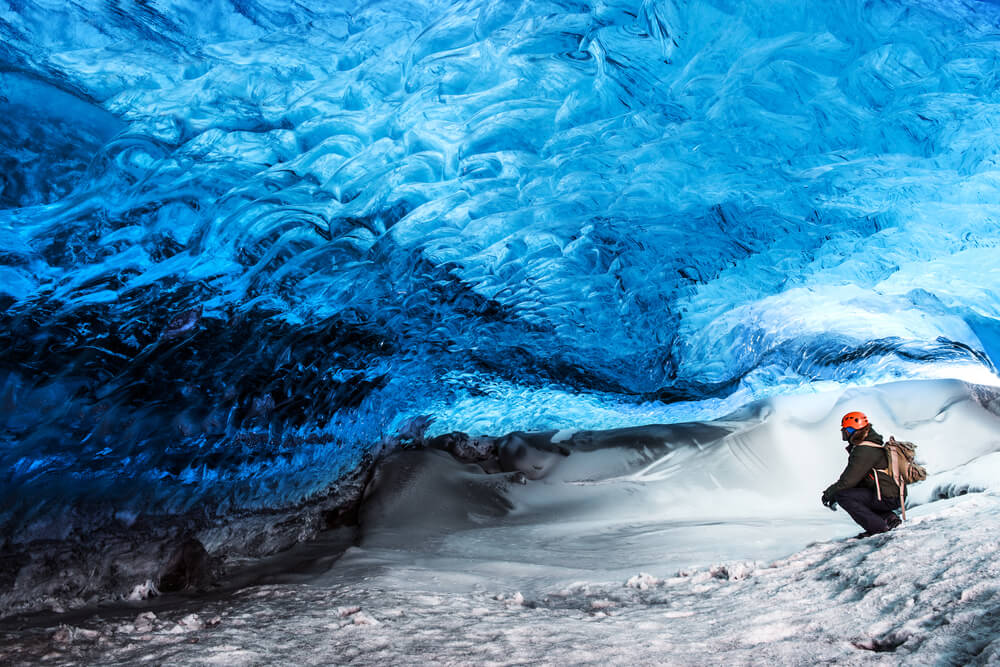 Scenic landscape, favourable weather conditions and a selection of hiking trails make Skaftafell an ideal destination for those who like to enjoy outdoor activities in Icelandic nature. Short and easy paths lead to waterfall Svartifoss and glacier Skaftafellsjökull, but for those who want to reach further out, the Morsárdalur valley and Kristínartindar mountain peaks are perfect concerning distance and labour. Skaftfell is also the ideal base camp for those who seek to climb Iceland‘s highest mountain peak, Hvannadalshnjúkur. To enjoy Skaftafell’s true value it is recommended to spend at least few days there, either staying at the campsite in Skaftafell or in a nearby accommodation. 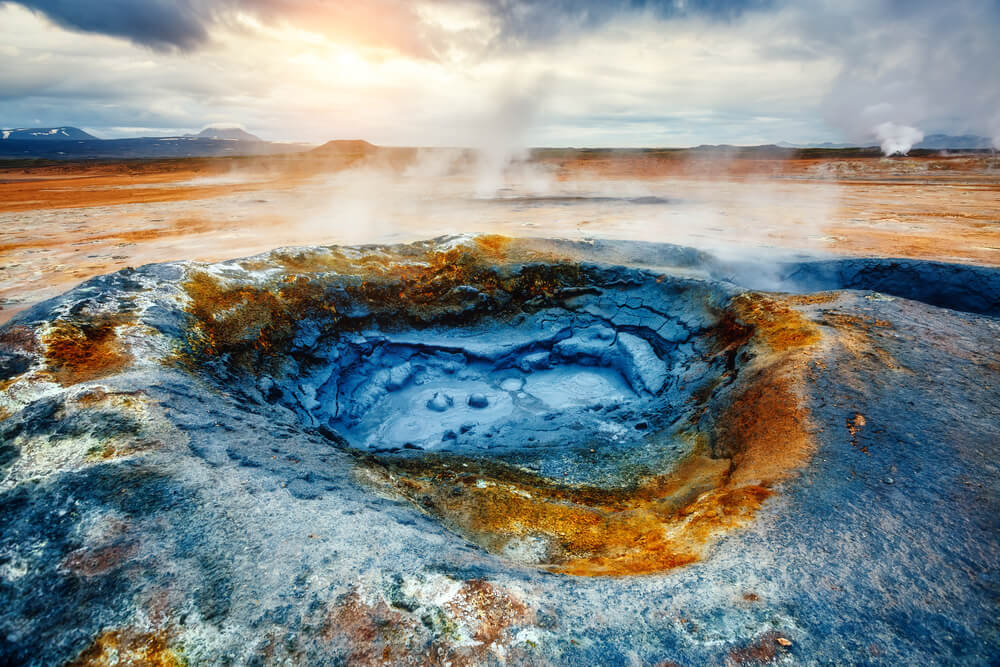 Lake Myvatn region, the best place to see the incredible panoply of geological phenomena that Iceland is known for. In the summer, along the river Laxa and around the shores of islands of this vast volcanic pond, live 28 different species. Among them are the rare Barrow’s golden-eye and the harlequin.
Dimmuborgir – the Dark Fortress at Mývatn are a real wonder of nature and nowhere else to be seen in the world, i.e on dry land. Dimmuborgir consists of large lava rock formations which make you feel like you stepped into another world – a world of fairy-tales.
Other attractions include waterfalls, small geysers, geothermal activity, Myvatn nature baths and much more. 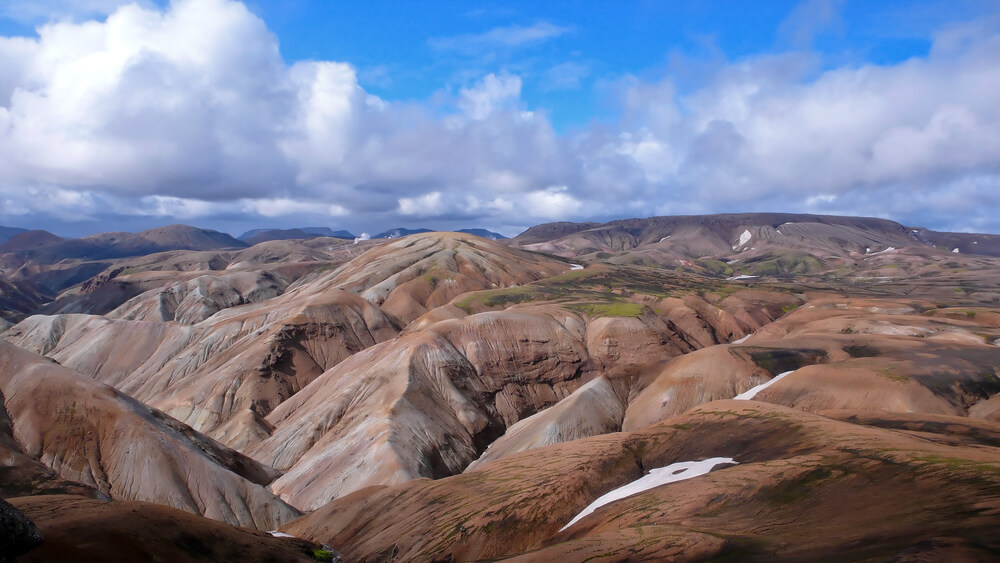 The Pearl of Iceland, Landmannalaugar, is a place like no other. It is a place in the Fjallabak Nature Reserve in the Highlands of Iceland, at the edge of Laugahraun lava field, which was formed in an eruption around the year 1477. Landmannalaugar is known for its natural geothermal hot springs and surreal surrounding landscape. The area is famous for its hiking trails and scenic views that make a great spot for an epic selfie.