When you get to Thingvellir on your golden circle route you might ask yourself what it is you want to see. It feels like a mandatory stop while in Iceland and in all honesty, it should be, as Thingvellir plays such a big role in the history of Iceland. Thingvellir is in many ways the birthplace of our nation, founded in 930, shortly after the first settlers founded Iceland in 874. Throughout the centuries, Thingvellir has been of great importance, a gathering place where laws were made, disputes settled and cultural heritage passed on to future generations. Þingvellir was full of life during these assemblies. Peddlers, sword sharpeners, tanners and brewers offered wares for sale, clowns performed tricks. Banquets where held. Casual laborers looked for work and beggars asked for alms. At the assembly one could hear news of faraway places, and various contests were held. Þingvellir was where people came to gather from all over the country, laying the foundation for the shared language and literature that has been at the very heart of Icelandic Culture ever since.

In recent decades, the Icelanders have celebrated their most important national events at Þingvellir: the first was the National Festival of 1874, the millennium of the settlement and in 1930 people assembled at Þingvellir to celebrate the millennium of the foundation of Alþingi. Later on, festivals were held to celebrate Iceland’s independence, music festivals were held there etc.

But enough of the historical mumble, below you’ll find the most exciting attractions to see while in Þingvellir.

One of the most exciting attractions at Thingvellir is Almannagjá, marking the eastern boundary of the North American plate. Almannagjá is 7.7 km long. Its greatest width is 64 m, and its maximum throw is 30-40 m. Its equivalent across the graben, marking the western boundary of the Eurasian plate is Hrafnagjá. It is 11 km long, 68 m wide and has a maximum throw of 30 m. The Þingvellir faults are believed to be the surface expressions of deeply rooted normal faults. The numerous fissures encountered on the valley floor are of similar origin.

Lögberg was the focal point of the old Alþingi (parliament), founded around AD 930. During the Old Commonwealth (930-1262), the Alþingi held legislative and judicial powers in modern terms. At the Law Rock in the latter part of June each year, the leading chieftain and priest of the Old Norse religion declared the session of parliament open, and declared sanctuary within the parliament site. At the law rock , important speeches were made regarding the affairs of the country’s inhabitants; the podium was also open to all who wished to address the assembly. Chronology was corrected there, summonses were issued, and various events were made known to the assembly.

Snorri’s booth is one of the most clearly visible booths at Þingvellir, named after Saga-age chieftain Snorri Þorgrímsson. Overgrown traces of buildings are visible on the parliamentary site at Þingvellir: these are remnants of shelters or booths in which people stayed during the two week session of the Alþingi (general assemblance) each summer. Traces of about 50 booths have been found, along both banks of the Öxará river and by the slope to Hotel Valholl. New booths were invariably built on top of remnants of older ones. Hence the visible remains we see today date mostly from the last two centruies of the Alþingi at Þingvellir, the 17th and 18th century.

In olden times drowning was widely used as a method of execution. People were drowned in marshes, in fresh water and in the sea. In Iceland, provision was made in law for execution by drowning from 1281, but written sources make no reference to such executions until after the Reformation in the 16th century. The Great Edict’s penalties were officially and drastically softened in 1838.

At Þingvellir women were drowned in Drekkingarhylur. No reliable accounts exist of drownings at Þingvellir, but women are said to have been tied up in a sack, pushed out into the pool, and held under. 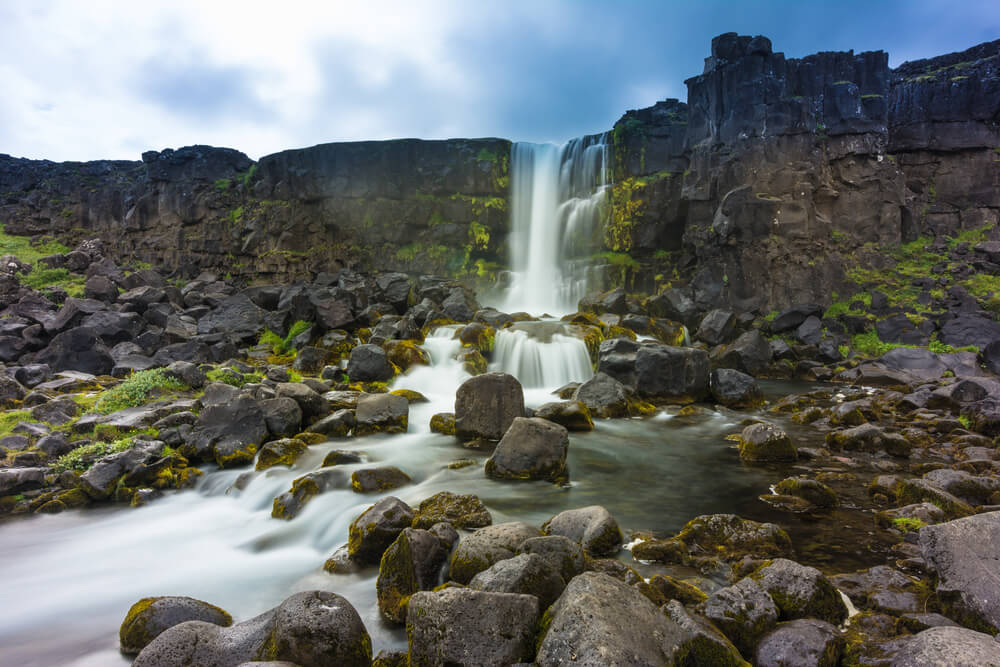 Öxarárfoss is the only waterfall in Þingvellir National Park. It flows from the river Öxará over the Almannagjá. The pool at the base of the waterfall is filled with rocks and is often extremely icy during winter. Legend has it that during the settlement period in Iceland’s early history, some settlers encountered a frozen river. They then dug a hole in the ice and put an axe in it to claim the land. The word öxi means “axe” in Icelandic. The waterfall is one of the main attractions of Þingvellir National Park, located on the eastern end of the rocky fault line. There is a path from the nearby car park leading up to it. 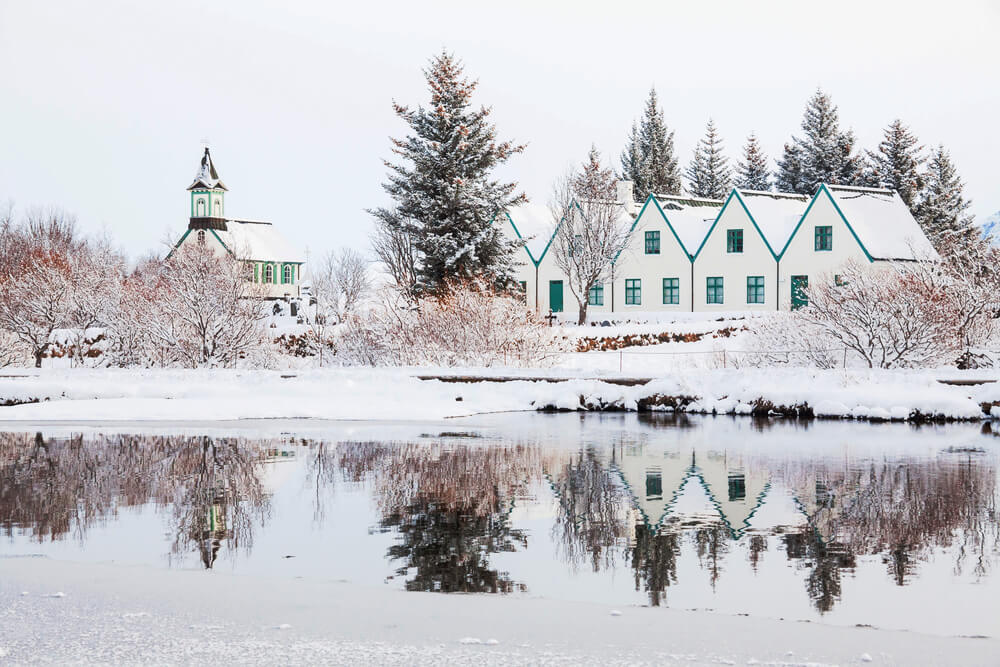 A church has been at Thingvellir since shortly after chrisianity was formally adopted by the Alþing in the year AD 1000. In the Kristinsaga is is stated that Olaf the Holy, king of Norway, who came to power in AD 1015, provided wood in orter to build a church at Þingvellir. It is not known where the original church stood but most likely there were in fact two churches at Þingvellir. The current church at Þingvellir was built in 1859 and consecrated on Christmas day that year. The tower was added in 1907. There are three bells in the tower, one simply old (year not known), another that was given to church by bishop Jón Vídalín and the third one “Iceland’s bell”, from 1944, the year that Iceland formally became a republic. To the east of the church is the Icelandic National Cemetery.

The current house at Þingvellir was built according to architect Guðjón Samúelsson’s design in 1930. At first three gable ends were built and they were used as the Park manager’s residence. After the fire that destroyed the King’s house in 1970 it was decided to add two more gables to the house at Þingvellir to provide a new summer house for the prime minister. Nowadays 4 out of the 5 gables belong to the Prime Minister’s office and the fifth gable houses facilities for the Park Manager and the priest of the church.

Flosagjá is one of the main faults at Þingvellir, with clear water up to 25 metres deep. Where it faces the main assembly site it assumes a prolonged fork; the eastern branch is named Nikulásargjá. After this was bridged in 1907, visitors began throwing coins into the water below and this part of the fault gradually became known as Peningagjá (“Money Fault”). Peningagjá does not figure in any folk tale, but one can see the coins in the deathly cold water as a symbol of the great natural resource that the water in fact is.

Silfra is located in the Þingvallavatn Lake in the Þingvellir National Park.  The valley, and Silfra itself, were formed by the divergent tectonic drift of the Eurasian and North American plates. The plates drift about 2 cm (0.79 in) farther apart every year, building up tension between the plates and the earth mass above. This tension is relieved through periodic major earthquakes at approximately ten year intervals, which have caused cracks and fissures to form in Þingvellir valley; Silfra lies at the rim of the Þingvallavatn Lak and is one of the largest and deepest of these fissures. The Silfra fissure intercepts a major aquifer, which feeds multiple springs at its base. Boulders and rocks falling into the widening cracks have formed caves within the fissures. Silfra is spring fed by groundwater originating as meltwater from Langjökull, Iceland’s second largest glacier, about fifty kilometres north of the Þingvallavatn Lake. Scuba divers and snorkelers are attracted to Sifra’s exceptionally clear, fresh water, its geological significance and the rare opportunity to swim between continental plates.