6 Great Attractions from Reykjavik to Vik – What to See

6 Great Attractions from Reykjavik to Vik – What to See

You might be one of the many travelers that decide to head east of Reykjavik to gaze upon the spectacular sights of south Iceland. The final destination for many is Vik in Myrdal, famous for its nearby attractions. Driving from Reykjavik to Vik is pretty straight forward, just follow highway 1 (the ringroad) and you’ll be there in about 2,5 hours.

But wait a second, you definitely don’t want to drive from Reykjavik to Vik in 2,5 hours because that would mean you’d be missing out on some breathtaking sights along the way.

It would take you forever to read through this post if we’d list all the attractions along the way, so we’ve narrowed it down to only six – six that we feel are absolutely necessary for you to discover and are easily accessible from the highway. 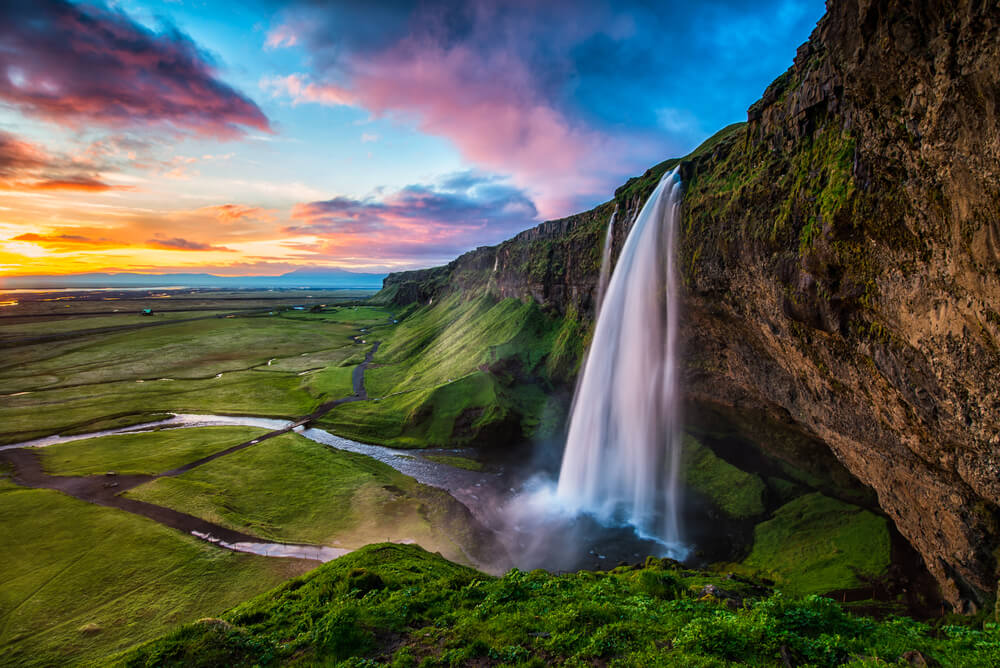 Seljalandsfoss waterfall is one of the most spectacular waterfalls in all of Iceland, situated between the town of Hvolsvollur and Skogar. The majestic waterfall spans 60 meters (200 ft.) and falls over the cliffs of the former coastline. It is unique in a way that it is possible to walk behind the waterfall, giving visitors the chance to see it from behind in amazing scenery. This is without a doubt one of the most visited attraction in Iceland so expect company while you’re there. Nevertheless it is a “must see” while in Iceland. 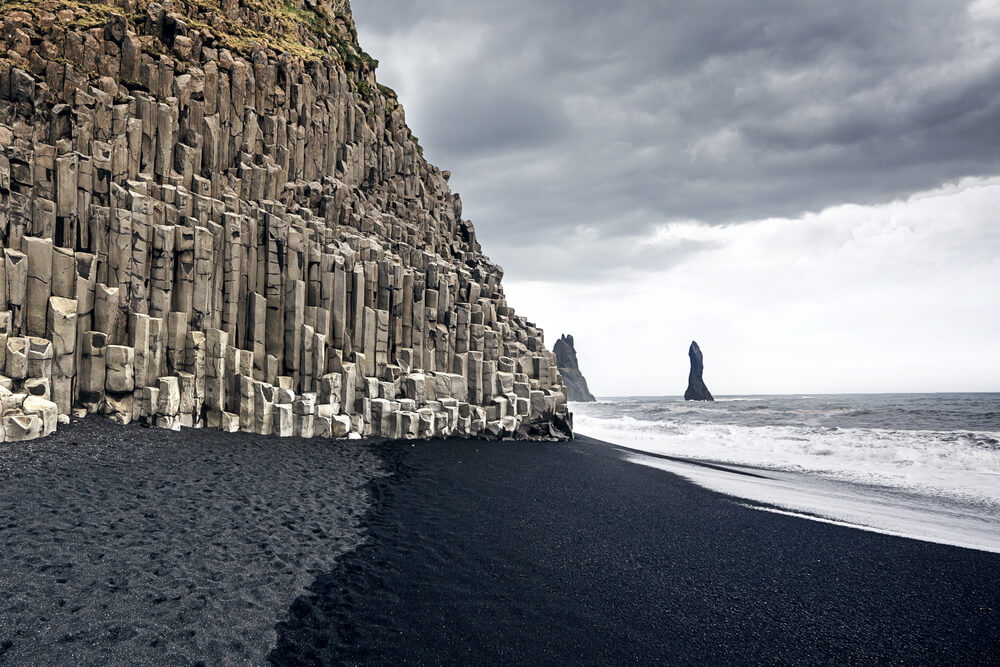 The black sand beach of Reynisfjara on Iceland’s South Coast is one of the most unique beaches in the world. It’s not a tanning kind of beach. More look than touch, it was created by lava flowing into the ocean which cooled almost instantly as it touched the water. The black sand isn’t the only lava creation on Reynisfjara. Opposite of the sea is an enormous natural pyramid made of basalt columns that looks like a staircase to the sky. This basalt cliff is called Gardar. The symmetrical columns were shaped when, once upon a time, lava flowed out, cooled and contracted. The slow speed at which the lava cooled made it crack and create these hexagonal forms. 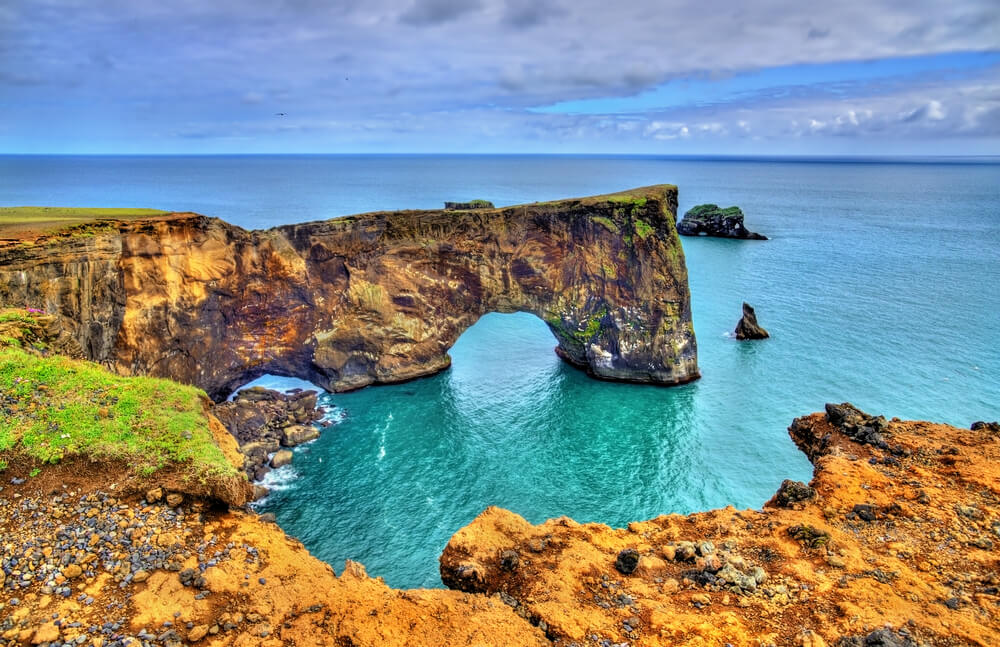 Tucked away down a little side street off the main road, Dyrhólaey (like many places in Iceland) would be easy to miss if you weren’t looking for it. But what a shame it would be to skip this detour off the main route. Home to hundreds of nesting puffins & sweeping views of the south coast, these seaside cliffs are easily accessible & incredibly impressive. The lower area is where you’ll see puffins & after a short drive up a steep hill of switchbacks to the lighthouse, you’ll be rewarded with a view of the south coast which seems to stretch all the way to Reykjavik.

If you simply just can’t get enough of waterfalls you should definitely go and check out one of the highest waterfalls in Iceland, Skogarfoss, located on the south coast. It has a width of 25 meters (82 feet) and a drop of 60 m (200 ft).  Due to the amount of spray the waterfall consistently produces, a single or double rainbow is normally visible on sunny days. This is a quite spectacular sight and well worth the visit.

According to legend, the first Viking settler in the area, Þrasi Þórólfsson, buried a treasure in a cave behind the waterfall. The legend continues that locals found the chest years later, but were only able to grasp the ring on the side of the chest before it disappeared again. The ring was allegedly given to the local church. The old church door ring is now in the Skógar museum.

The waterfall was a location for the filming of the Marvel Studios film Thor: The Dark World, as well as The Secret Life of Walter Mitty. The waterfall has been used as one of the locations of song Geruwa, in 2015 Bollywood movie Dilwale featuring Shahrukh Khan and Kajol.

Seljavallalaug is a protected 25-metre outdoor pool in southern Iceland. The pool is one of the oldest swimming pools in Iceland and was built in 1923. The pool is in an awe inspiring setting. You are surrounded by massive cliffs on 3 sides with waterfalls and lush green foliage and the sound of a river raging just below. Just sit back, close your eyes and soak it all in. It truly is an amazing experience. If you are however looking for something like a spa experience don’t come here, this literally is a concrete pool built into the side of a mountainside filled by hot springs. It is not maned by staff with towels selling services.

While on your journey to Vik, you will have the chance to gaze upon Eyjafjallajokull on numerous occasions. This is of course the famous volcano/glacier that made the news in 2011 when it erupted, causing flights to be canceled all over Europe, due to ash in the atmosphere. Many consider the eruption to be the greatest marketing campaign for Iceland of all time, as it gained so much publicity. Be it that or not, it is first and foremost a remarkable attraction not to be missed! You will see it to your left on your way to Vik, soon after you pass Seljalandsfoss. You can also see it while at Seljavallalaug, which is pretty nice!